CfP: The varieties of anti-skepticism, from past to present, University of Navarra (Pamplona, Spain)

CfP: The varieties of anti-skepticism, from past to present

The varieties of anti-skepticism, from past to present
16-18 September 2020
University of Navarra (Spain) 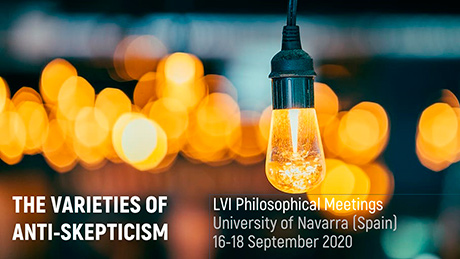 Very rarely has philosophy been unperturbed by the claims of skeptical challenges. From the Stoics’ engagement with the Academics to the present, philosophers have often struggled to produce the kind of arguments that would ideally persuade the skeptics.

Skepticism has historically evolved in its own fashion. Ancient skeptics argued that we should suspend all judgments and live our lives on the basis of appearances or probabilities; modern skeptics held that none of our beliefs are certain, or amount to any knowledge, or are ultimately justified. Likewise, while the ancient sceptics doubt is general, modern skepticism limits its critique to a restricted domain of beliefs: the ones about the external world, other minds, or morality. Hume famously claimed that skeptical arguments admit of no answer but produce no conviction; Wittgenstein, that skepticism has been given too much credit for the kind of assumptions on which it relies; Kant complained that philosophers blatantly failed to prove the existence of the external world, and Heidegger, that philosophers relentlessly attempt this proof again and again.

So, can any anti-skeptical argument command universal assent? Can the philosophical tradition be brought to agree on the best of them? Are those arguments equally solid, and may skepticism benefit from their diverging claims? The purpose of this conference is to shed light on the ways in which philosophers have responded to skepticism from the past to the present, in the hope that the variety of anti-skeptical arguments can be reconciled or if not, be justifiably put in order.

While any papers on the topic of anti-skepticism will be considered, special consideration will be given to papers dealing with the work of our keynote speakers.